Prize Patrol on the Loose!

I promised to share with you some of the free gifts that I got at Convention, just because I was in the right place at the right time (must be present to win)!

During each convention there is one general session per day and the rest of the day is set aside for business-related classes. One of the cool things about convention, besides the AWESOME demonstrations by the corporate creative types, is the Prize Patrol. This year we were given colored wrist bands; my wrist band was "Neon Blue." Right before a break or during a transition from one speaker to the next, the prize patrol was on their job. Well, after almost three days without a prize, m 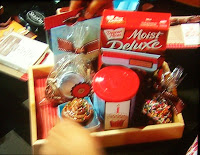 y belief that a prize was coming my way was beginning to dwindle... But not all hope had been lost... It happened on Saturday afternoon right after Carrie Cudney presented a demonstration featuring gifts from the kitchen. She had just shown us how to make a cute cupcake ensemble complete with cake mix, etc. It was approximately 2:30 pm MST... Carrie announced the winning color... it was neon blue... I jumped from my seat in the front 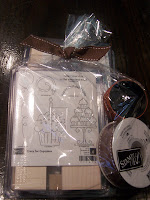 row (of my section) and started jumping up and down. The prize patrol (a.k.a. Stampin' Up! staff members) came running out of the black curtained area into the aisles with shopping bags in their hands. I was in an accessible area so I got mine right away ... Here is what I got. Isn't that the coolest? The prize package includes the Crazy for Cupcakes set (Item #111618, $23.95), the Cupcakes Stampin' Around Wheel (Item #113121, $6.50) and a spool of 1"Chocolate Chip Double Stitched Grosgrain Ribbon (Item #111849, $8.95, 10 yds) all available in the new Fall-Wint 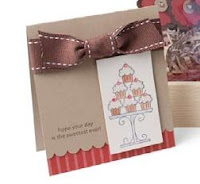 er 2008 Idea Book and Catalog. Here is the card she made with the Crazy for Cupcakes stamp set. She used Dazzling Diamonds on the cupcakes so there is plenty of sparkle! It is such a cute card.

Later that afternoon, we got another super surprise! It was near the end of the last general session. We had been given a hint at a one of the business classes earlier in the day that something fun would be happening later. I believe the presenter's exact words were ... "I know something you don't know" ... sung in a very taunting tone! The other class participants were begging to hear the news and she said no way! Anyhow back to the general session. So it was nearing the end of the convention and Shelli Gardner, the CEO and Co-Founder, came onto the stage to bid us farewell and make the traditional next convention dates announcement. Well, while she's on stage talking to us we hear the sound of a doorbell and onto the stage walks a man in a brown UPS uniform with a Stampin' Up! box in his hand. Here is what happens next:
Shelli: "May I help you?" 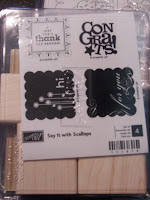 At this point the whole room of 6,000 women (and a few men) goes CRAZY!!! There were cannons shooting out confetti and music to match the excitement of the occasion. It was so much fun! So what was all the excitement about, you might ask? More presents! UPS purchased and gave to the demonstrators a FREE STAMP SET. They selected the new Ronald McDonald House Charities stamp set, Say It with Scallops (Item # 111678, $17.95). (Talk about a win-win!) This set coordinates with the new Scallop Square punch (Item # 112081, $15.95) that will be available in the new Fall Winter 2008 Idea Book and Catalog. Do you have your copy yet? Contact me to find out how to get a FREE copy! (714) 264-0026 or planetkreative@gmail.com.

It was an awesome conclusion to a spectacular week. I do hope that one or two or three (or more of you will consider joining me at convention next year August 5-8, 2009). Let's chat so you can learn more about how you can attend.

Have an awesome day!
Posted by Estella at 12:00 PM

Something to think about...